Volcanoes are points in the Earth's crust which have ruptured, allowing lava, ash, rocks and gas to erupt during periods of seismic activity.

They are typically located along the borders of the tectonic plates which sit on the lithosphere. When changes in pressure and density occur in the magma chamber beneath the volcano, it can force lower density lava and rocks to rise; sometimes explosively. More than 75% of the active volcanoes are within the Pacific 'Ring of Fire' - a band of volcanoes and ocean trenches where different plates meet. The Ring of Fire stretches along the western coast of South, Central and North America and then across to the eastern coast of Russia, China, and the entirety of Japan, the Philippines and many islands in the south Pacific Ocean.

While many volcanoes are located under the ocean, those on land can pose great danger to life depending on proximity to inhabited areas and the intensity of the eruption. Mount Vesuvius in Italy is a famous historical and modern example; the volcano destroyed two cities two thousand years ago, and today millions of people still live within close proximity of this active volcano.

Volcanoes are generally classified as being active, dormant or extinct based on their level of activity. Determining whether a volcano is active or not can be challenging, as volcanoes can be active under the surface with no outward signs on the surface. Historical records are important in this respect, as volcanoes that have erupted recently are generally likely to do so again but there may be years or centuries between periods of activity.

Lava and rocks pose an immediate physical threat to the surrounding area from an erupting volcano, destroying anything in their way, but these are not the only dangers a volcano poses. Gas emitted by volcanoes - often sulphur dioxide - is toxic and so poses respiratory hazards if people or animals are nearby. Ash from volcanoes can often extend for kilometres, driven by wind, and in addition to respiratory hazards is also a risk for aircraft as the fine particles in the ash can damage equipment.

When a volcano shows signs of imminent eruption, any nearby residents are often evacuated as a precaution and a no-fly zone is established in the area.

Satellites are used to observe active volcanoes, obtaining optical and radar imagery of an eruption and assessing the subsequent damage from lava and rocks to the surrounding area. The ash plume is also tracked, to determine whether there is anyone living within its path that may be at risk.

Radar data is also of use in long-term studies of volcanoes, enabling scientists to study ground movement which may indicate seismic activity and thus a potential eruption. 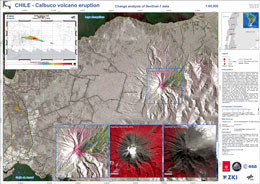 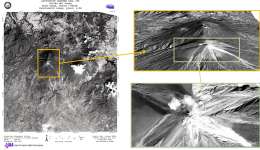 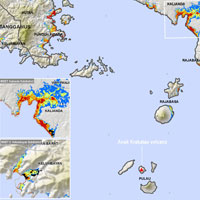 Earthquake and eruption of Kīlauea Volcano in the United States