Heavy rain in northern Chile has caused floods which left 17 dead and affected thousands of people.

It is reportedly the worst rain that this region has experienced in 80 years.

The rain began on 24 March over the Atacama Region. This area of the country, which is also home to part of the Atacama Desert, rarely experiences a great deal of rain, and the desert is regarded as the driest place on Earth.

This unusual storm activity which impacted the area recently was a result of a cold front over the Andes, which resulted in rain falling over the mountains. This rainwater flowed down the mountains into the nearby towns and rivers.

Rivers, such as the Copiapo, overflowed, and swept through towns in their path. Almost five thousand people were left homeless by the flooding, and it is estimated that 11,000 were affected by the disaster.

Some towns lost all power and access to clean water, and other towns have been left with a thick layer of mud through their streets. Roads have been blocked by the flooding, which has made helicopters one of the safest options for rescue efforts.

Emergency workers are searching for twenty missing people, and have helped others take refuge in shelters. 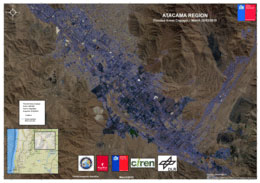