Wildfires broke out in Israel on 18 November in the Jerusalem and Haifa areas.

2,000 firefighters, 3,000 military personnel and 20,000 police officers spent a week battling the fires and conducting rescue operations until the fires were extinguished on 25 November.

Worst affected by the fires was Haifa, one of the largest cities in Israel. The region has been experiencing a drought for two months and strong winds blew the fires, which started north of the city, into Haifa on 24 November.

No casualties were reported, but 80,000 people were evacuated and 527 buildings were destroyed, leaving 1,600 people homeless.

Arson has been suspected as the cause of some of the fires, and a number of arrests have been made.

International aid was provided to help extinguish the wildfires with additional aircraft and personnel.

It is estimated that the fires destroyed 32,000 acres of land, which includes forests and urban areas. 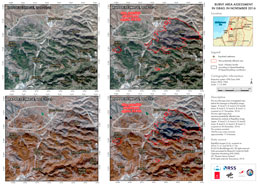 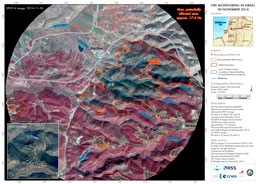