Hurricane Harvey made landfall in Texas as a Category 4 hurricane on 25 August. It has been described as the worst storm to affect Texas in over fifty years and has left nine dead so far.

The storm has particularly affected the city of Houston, where over 30,000 people have been forced to leave their homes.

The National Weather Service described the situation as unprecedented. After making landfall Harvey near Corpus Christi, the storm moved very slowly along the coast of Texas in a north-east direction and brought over 120cm of rain in a matter of days; more than the area normally receives in an entire year. Though Harvey has now weakened to a tropical storm, the rain is expected to continue as the storm continues its path into neighbouring Louisiana.

A state of emergency was declared in advance of the storm, and in the aftermath the area has been declared a federal disaster zone.

There are concerns about the rising water level in the Brazos River, which has led to authorities ordering the evacuation of 50,000 people in Fort Bend County.

Houston in particular has experienced flooding before, and has natural and artificial defences in place to assist with such a disaster, but the scale of this storm overwhelmed those defences. The rain quickly built up in flat areas, leaving some streets flooded with water over a metre high. Residents have been urged to stay off the roads, many of which have been flooded.

The state garrison of 12,000 of National Guard servicemen, and thousands of police, emergency workers and volunteers have been conducting rescue and relief operations to aid the thousands of people left stranded by the flooding. Tens of thousands of people are housed in temporary shelters, unable to return to homes which are now underwater. 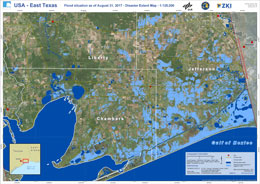 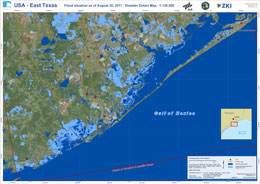