Fire monitoring through the Charter

Fire monitoring through the Charter

In recent years, fires are increasing worldwide and have become a major disaster that can threaten lives and destroy natural resources. Climatologists claim the higher frequency and intensity of wildfires are related to an increased surface temperature on the Earth. Previous studies also demonstrated the link between climate change and forest fires. There is a higher possibility for fires to start, due to droughts caused by rising temperatures in some regions and hot and dry climates created from frequent heatwaves. Anthropogenic deforestation to change forest into farmland is also a major cause that results in an increasing number of wildfires. 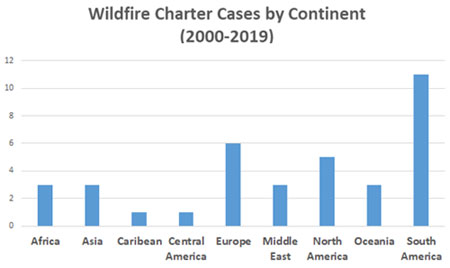 2020 marks the 20th anniversary of the International Charter Space and Major Disasters, and today we take the opportunity to look at how wildfires are monitored by the Charter and describe some recent notable examples of wildfires the Charter has supported. The Charter has supported 49 wildfire cases since its initiation in 2000 by providing imagery from multiple satellites to assess the scope and analyze damages from wildfires. As of August 2020, there have been 670 activations of the Charter, and approximately 8% of those activations have been for wildfires. 45% of the wildfire activations requested were in South America, Europe and North America.

In 2019 and 2020, large fires occurred worldwide on an unprecedented scale. In Australia, wildfires took place from June 2019 and lasted until February 2020, and the disaster became known as the Black Summer. More than 18.7 million hectares were burnt across Australia, about 6,000 buildings were destroyed and damaged, and approximately one billion animals were killed by the fires. Many animals lost their habitats, and Koalas in particular were left endangered when a wide range of eucalyptus forests – which Koalas are very dependent on - were destroyed. NASA also estimated that 306 million tons of carbon dioxide were emitted in the states of New South Wales and Queensland since August 2019. The International Charter was activated on November 13, 2019 for the Australian wildfires, and the Charter member agencies and partners provided 2,077 products collected from 20 satellites. This marked the largest number of satellite products provided for any activation in the Charter's history at the time.

The 'lungs of the Earth' were also on fire in 2019. In South America, wildfires started when fields were burnt to clear land for cultivation, and the fires spread out into regions of the Amazon rainforest. INPE reported over 906 thousand hectares of forest in the Amazon were lost by fires in 2019, and as the wildfires grew out of control, the international community called for additional measures to protect the Amazon. The International Charter was activated twice for the Amazon wildfire (in August and September). During these activations, the Charter member agencies and partners provided 406 products collected from more than 15 satellites, and 14 value-added products were uploaded on the Charter website. 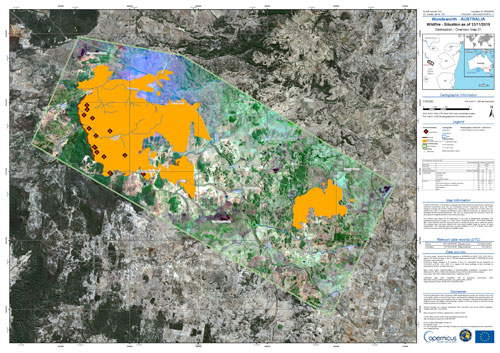 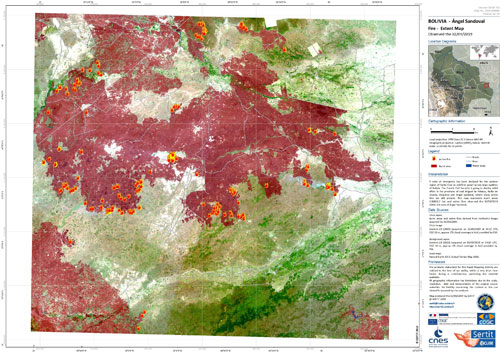 Siberia and the Far East of Russia are also heavily affected by large forest wildfires every year. Hundreds of thousands of hectares are burnt annually which causes enormous harm to the environment and ecosystems. Severe infrastructure damage also occurs, and in worst-case scenarios dozens of small villages and inhabited localities are burnt to the ground. One such example is the May 2017 fires in Krasnoyarsky Krai (Siberia) when three people died, more than 600 were evacuated, and 170 houses and 6 industrial objects were destroyed. Satellite data provided by the Charter members helped the EMERCOM of Russia to evaluate the burnt areas as well as localize the active fire spots which greatly helped the response and evacuation operations as well as mitigation of the fires. Below is an example of a map produced by the Charter, using RapidEye and SPOT-6 images, which display the burnt area as well as active fire spots close to villages.

For the analysis of active fires and burnt areas, optical multispectral satellite images are very useful. Thermal infrared spectral reflectance can be used to detect abnormal characteristics in the burning region. A brighter region in the thermal infrared band indicates a high temperature on the surface, which can delineate active fires. The vegetation indexes are another method to detect burnt areas. As vital plants absorb solar radiation in the visible red spectral region and emit solar radiation in the near-infrared spectral region, the Normalized Difference Vegetation Index (NDVI) - the simplest and most popular vegetation index - uses the difference between spectral reflectance in red and near-infrared bands. Higher NDVI values indicate healthier vegetation conditions. So, the burnt areas can be detected by comparing NDVI values of the satellite images acquired before and after the fire. In the following map, this method was applied to KOMPSAT-3 and Sentinel-2 satellite images to detect the large burnt area in South Korea in April 2019. 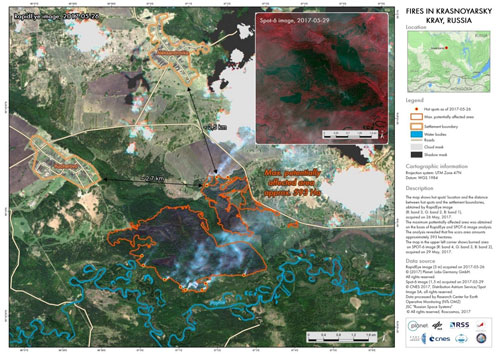 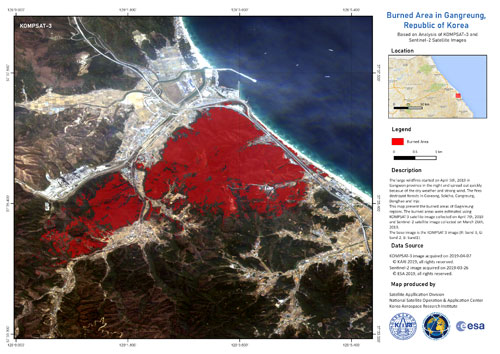 First image: Fire extent and active fires observed on May 26 and 29, 2017 in Krasnoyarsky Krai, Russia
Second image: Burnt area map observed on May 7, 2019 in Gangreung, Gangwon Province, Republic of Korea

Through the International Charter, various satellite images have provided valuable information including quick statistics and the locations of these extensive disasters, especially for fires which are fast-growing and offer limited site visits. The data provided by the Charter members offers rapid and effective response to fires to support national disaster organizations worldwide.