The accident occurred in the Port of Beirut at 18:08 local time (15:08 UTC) and was caused by the explosion of a large quantity - 2,750 tonnes - of ammonium nitrate at a warehouse in the port.

Though there were reports of a fire shortly before the incident, it is not know what triggered the explosion. There had been concerns about the safety of storing so much of the material at the warehouse for several years, however, since it was transferred there from an abandoned cargo ship in 2014.

The explosion is reported to have damaged half of Beirut, and was so powerful that the United States Geological Survey registered it as a 3.3 magnitude earthquake. Residents in Cyprus and Israel also reported feeling the explosion.

Satellite imagery acquired after the explosion show a large crater where the warehouse had been and reveal damage to the port area. The Orient Queen, a cruise ship that was docked in port, was badly damaged and capsized on 5 August.

The incident occurred at a difficult time for Beirut, while the city was already trying to cope with the Coronavirus. Many of the hospitals were reported to be almost at capacity before the explosion, making response efforts in the aftermath of the explosion more difficult. International aid has been dispatched from several countries to respond to the disaster. 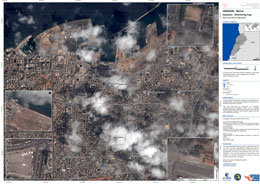 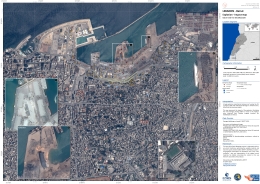